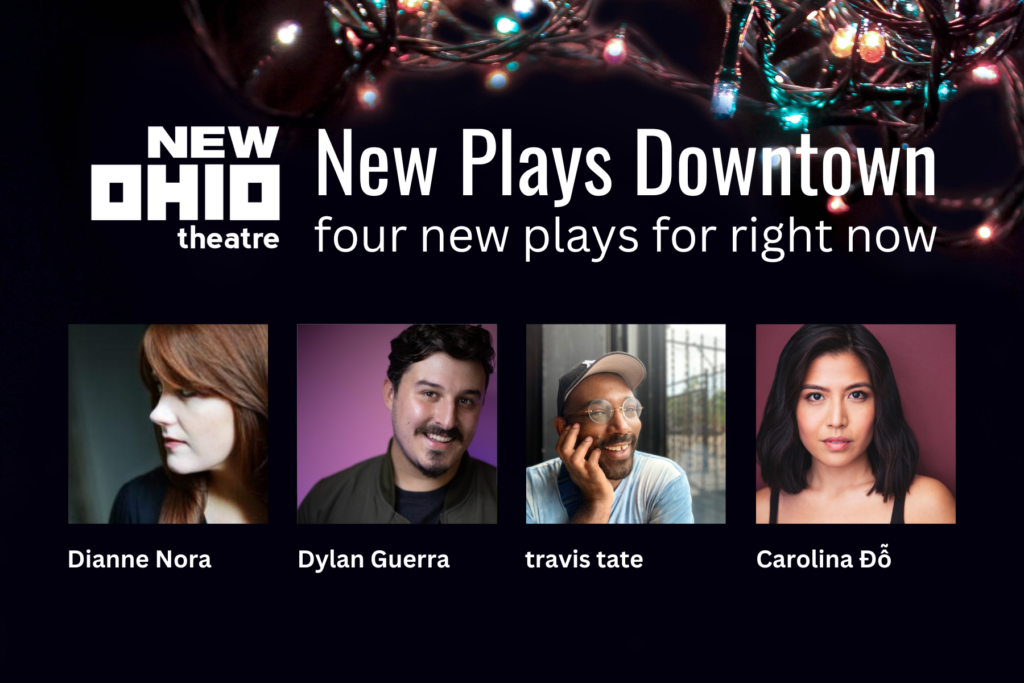 New Plays Downtown is a series of four rehearsed free readings of new plays in development from some of the most exciting emerging voices in New York theatre today. These plays speak to our moment with urgency, humor, playfulness with form, and the ground-breaking irreverence for convention that have become synonymous with New Ohio and New York’s independent theatre scene.

travis tate (they/them) is a queer playwright, poet, and performer from Austin, TX. Their poems have been published in Southern Humanities Review, Vassar Review, The Boiler, among other publications. Their first collection of poetry, Maiden, was published in June 2020 by Vegetarian Alcoholic Press. They were a fellow in the Liberation Theatre Company’s Playwriting Residency and currently are in Theatre East’s Writers Group. Their plays have been presented at Dorset Theatre Festival and Victory Gardens. They earned their MFA in playwriting and poetry from Michener Center for Writers at the University of Texas at Austin. Find out more information at travisltate.com

In some forgotten corner of the Kremlin, two actors prepare for the role of a lifetime: Joseph Stalin. An imagined history based on the real lives of two of Stalin’s doubles, as they prepare for the Conference at Tehran, when three so-called Great Men (or were they merely players?) decided the fate of the 20th century.

Dianne Nora is a playwright, dramaturg, and comedy writer who works in Chicago, Brooklyn, and Dublin, Ireland. She was a 2018-2019 member of Goodman Theatre’s Playwrights Unit, where she was commissioned to write Ruth Bader Ginsburg: A Living Document. She recently assisted her mentor Tracy Letts on the world premiere and Broadway productions of his play The Minutes, a finalist for the 2018 Pulitzer Prize in Drama. She collaborated with Scott Dikkers, founding editor of The Onion, on his book Welcome to the Future Which is Mine by (Not) Elon Musk, available as an audiobook read by comedian James Adomian. In 2019, an abbreviated version of her play Monica: This Play Is Not About Monica Lewinsky premiered at the Edinburgh Fringe, where The Spectator named it the “Best of the Fringe.” Her Zoom play for young audiences, Journey Around My Bedroom, was produced at New Ohio Theatre in 2020, and recommended by The New York Times (Top 5, Weekend Section). She’s a headline and features contributor at The Onion, and her humor writing has also appeared on The Hard Times and Funny Or Die. BA: New York University; MPhil: Trinity College Dublin; MFA: Columbia University School of the Arts.

AN CHOI : eat / play / rage – (A don’t fuck with the weekend shift play)
by Carolina Do

“Work hard. Play Hard.” is the unofficial official motto of the waitresses at AN CHOI. A weekend shift in the weeds can feel like purgatory, especially if bringing pho to entitled Lower East Siders is not your life’s calling. But in spite of their constant bickering on-and-off the floor, these misfits are one another’s chosen families, guided with love by the matriarch and owner of the restaurant, even as she struggles to forget her past.

There’s something inside him, he can feel it writhing in him. There’s also a scientist looking for that worm. When he meets the scientist… Could be love. Could be worm.And also- what does worm want? Why worm choose him? Is he worm? Is worm him? Icktar knows.

Dylan is a queer Latine writer/artist based in Brooklyn. He’s a current member of Ars Nova’s Playgroup, p73’s I73, and EST’s Youngblood. He’s a recipient of the MTC Sloane Comission and the Winegarden Commission at Playwright’s Horizons. He recently wrote on HBO Max’s “The Other Two” and is currently working on projects with A24, Picture Start & Get LFTD, Family Owned, and Temple Hill.